{A photograph} by Vijay Jodha captures the completely happy, smiling faces of faculty college students attempting to identify their village on a globe.

The village is in Gurez Valley of Kashmir, close to the LoC. Observing the cheer among the many college students on this tumultuous area, Jodha knew it was a particular second. This and several other different photographs by 10 photographers are featured within the digital exhibition Three for 30, curated by Goethe Zentrum, Hyderabad. The exhibition commemorates 30 years of German Unity Day (October 3) and doffs its hat to the Gandhian precept of non-violence with its theme of peace, concord and unity.

Jodha recollects his go to to the Valley, “I used to be travelling with Honeybee Community which helps innovators on the grassroots; the organisation additionally encourages college college students to give you new concepts and presents those that give you one thing progressive. A globe was gifted to those college students they usually had been thrilled, attempting to determine Kashmir and their village.”

Three for 30 options three photographs by every of the ten photographers. Amita Talwar delves into her in depth travels to showcase a candid picture of two younger monks sharing a enjoyable second, and a devotee discovering peace with a sacred thread tied across the wrist.

The photographers’ impressions on non-violence, unity and concord are various. Harpal Singh who has reported extensively on life in Telangana, captures a gaggle of males biking on the freeway and others perched on vehicles on an extended journey house. Samar Jodha underlines the concept of unity via outstretched arms of a bunch of faculty youngsters. Namrata Rupani paperwork the tranquillity at Quli Tub Shahi tombs, and the orange-hued skies of Hyderabad in opposition to the Hussain Sagar lake.Saurabh Chatterjee who has been documenting cities and communities, takes viewers into Hyderabad’s Previous Metropolis the place an idol of goddess Durga is being transported for set up in a pandal as burqa-clad girls stand by. On this a part of Hyderabad, festive celebrations witness an intermingling of communities. In one other picture, he trains his lens on Hindu and Muslim boys partaking in Holi revelry. 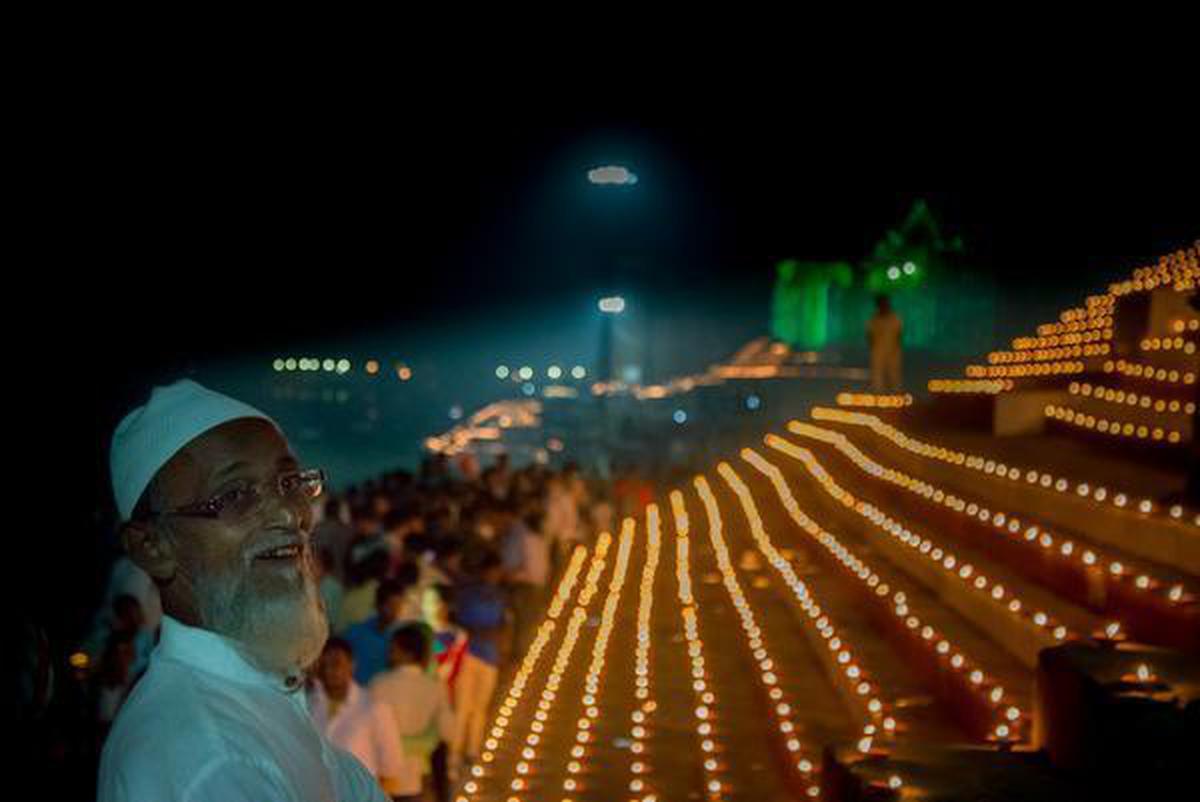 Yet one more picture from Varanasi exhibits a Muslim man beaming on the sight of the ghats lit up in rows of diyas. “All these are candid photographs. The smile you see on the person close to the ghats is heartfelt. In Varanasi, folks residing near the ghats take up the duty of cleansing and adorning the ghats for Dev Diwali. I got here throughout this Muslim gentleman who was happy with the decorations they’d achieved earlier within the day,” says Chatterjee.

Throughout his repeated visits to Varanasi, Chatterjee noticed how totally different teams spruce up the ghats for the festivities: “Guests from Telangana and Andhra Pradesh make elaborate floral rangolis on which the diyas are positioned.”Dipping into his archives, Sreesailem Pasupuleti was reminded of the time in Vrindavan when he seen a person strolling along with his pet rooster: “Folks worshipping cows is a typical sight in Vrindavan and whereas capturing one such second, I noticed this man. I adopted him and learnt that he has three pet roosters.” Elsewhere, in a fishing hamlet in West Bengal, Pasupuleti noticed a gaggle of fishermen hauling a ship in direction of the shore: “The fishermen work in unison. They head out in teams of 10, on a ship, and the journey lasts wherever between two to 5 days. They return with a superb catch, which is offloaded, they usually haul up the boat collectively for cleansing and restore work.”

The exhibition features a few arresting photographs by photographers Serish Nanisetti, Swarat Ghosh, and Sourav Nandi, and is on view until November 7.

Go to https://www.telc.co.in/artwork or the hyperlinks accessible at Goethe Zentrum’s social media accounts.

Grand Army: Will there be a Season 2 of the web series on Netflix?

Fan persuades Vicky Kaushal to take off his mask for a selfie, watch what happens next – bollywood